23rd September 1950 – 19th August 1996
This site is both a commemoration and a celebration of the life and music of Sian Daniels. Sian was a singer/songwriter and teacher who worked with many significant artists. She first came to prominence with the band Halcyon in the early seventies- winning recognition through Melody Maker’s  National Folk- Rock Competition of 1972. After that she toured with Ralph Mctell, later moving on to perform with Maddy Prior, Bert Jansch, Pet Nu, John Spencer  and Carol Grimes. In 1976 Sian joined the fine British soul collective Kokomo and toured extensively with the band.

After two years in San Francisco working for a record company, and developing her song writing, Sian returned to the UK to work with bands in the West Country. Back in London in 1980 she formed a band called Hotlines that stormed South London. In 1983 she was invited to join Poison Girls- recording and gigging with this influential punk band across Europe and the States until 1985. After this she recorded with, among others, Rory Mcleod and Wolfie Witcher while gigging with her own band Hotlines, reformed in 1986, and with many other musicians and performers. 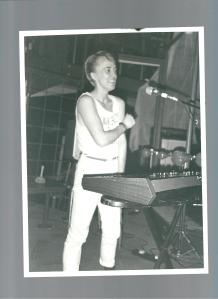 Throughout her career Sian continued to write distinctive songs that have great creative vitality, honesty and defiant individuality. The songs she wrote in the last years of her life are a moving testimony to her courage and integrity: they are both poignant and life-enhancing.  Twelve of Sian’s compositions can be heard on a new compilation I have made of her recordings:  ‘As Open As The Sky’. You will soon be able to order a copy of this album from this site.

I had the great privilege of working with Sian on her music while she and I were teaching at Lambeth College in London. In the coming months I hope to be able to issue the recordings she made of some classic ‘torch songs’  and her versions of R and B standards recorded in the early 90’s. In addition I have the manuscript for some more of her own compositions. Through this site, and through live performances with fellow musicians, I aim to make these available too.

In the meantime please explore the rest of this site where you will find an archive of photographs and some press cuttings from her career, together with a discography of her recordings with other artists. Please contact me if you have memories,  images  or recordings of Sian that you would like to share.